10 Days Free Yoga Session from 11th june to 20th jun 2020 On IYD 2020 under the agies of Ministry Of Ayush. Sesson is conducting by Suman Verma yogs Wellness Instructor MIN. of AYUSH 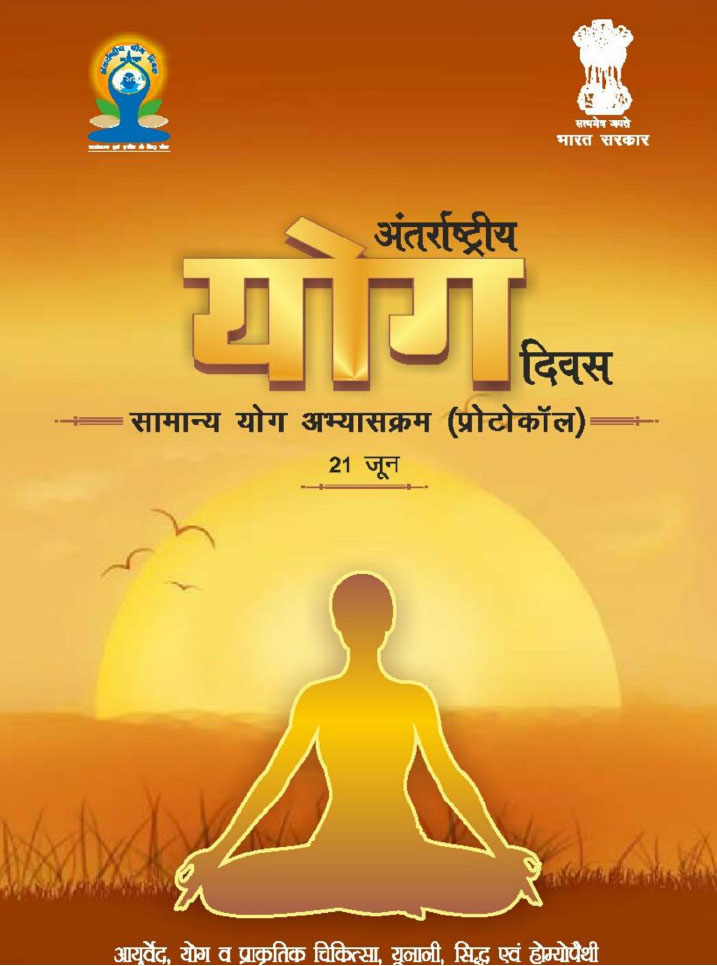 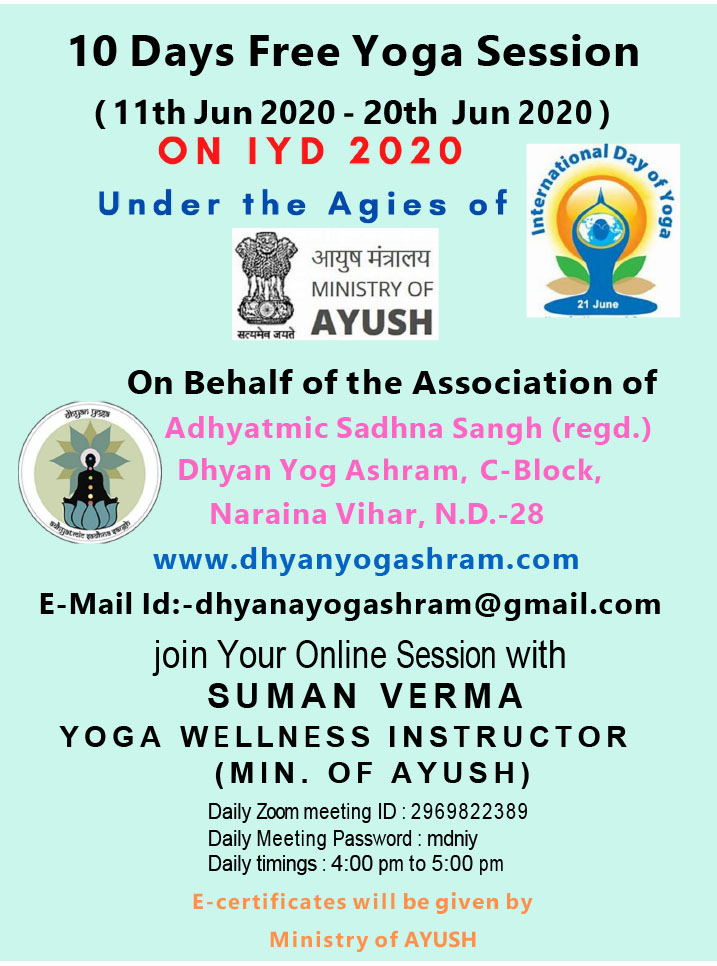 Winter Charity distribution program has begun at ashram on 25th Dec. Some of the disciple families and members from neighborhood are coming for help and support. Despite severe cold the ashram employees and other brave hearts are devotedly conducting the program. Some pictures from 25th and 26th Dec. 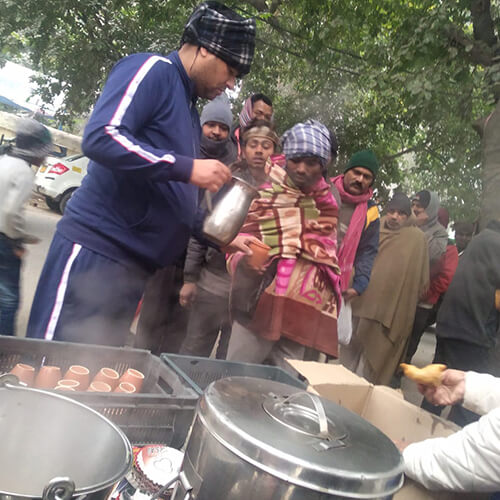 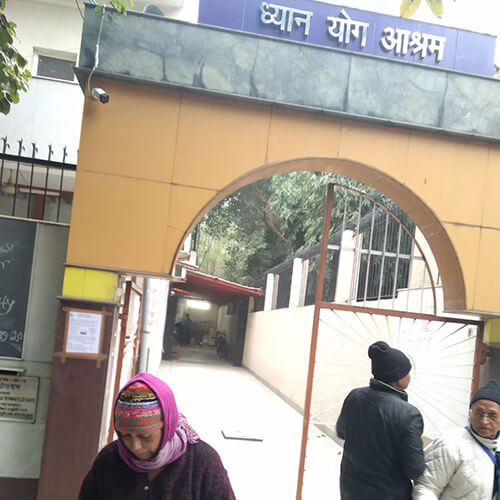 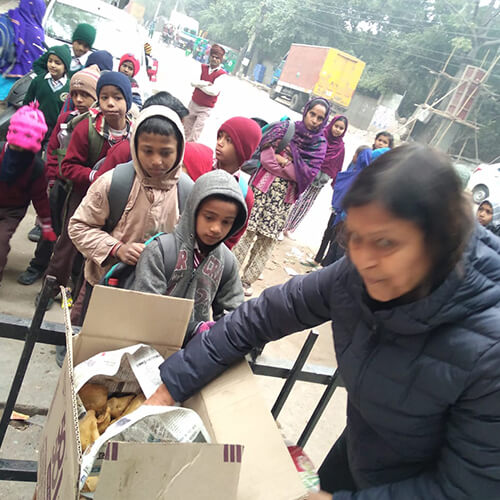 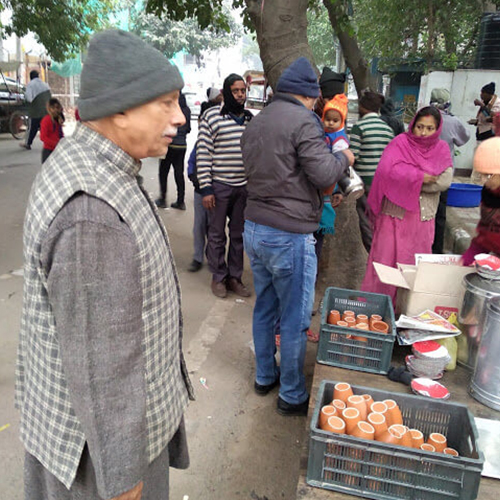 Distribution Of Caps, Socks, Tea and Snacks at Ashram on Lohri, 13th Jan 2020
The Society’s Distribution Team at Ashram and other Glimpses of the Charity Program
Prakash Smriti Diwas

The Special Energy Renewal Camp at Dhyan Yog Ashram, Naraina was well attended by the long time disciples of Swamiji and many new sadhaks who joined the three hours shivir enthusiastically. The grace of the Guru was flowing gently in the sacred precincts along with anand bhava and vibrations of Sri Krishna. Some pictures from the camp follow.

CELEBRATION OF VAN-MAHOTSAV AND INDEPENDENCE DAY

Adhyatmic Sadhna Sangh organized celebration of ‘Vanmahotsav 2019’ in collaboration with All India Kitchen Gardens Association (AIKGA) on 14th August 2019 at DhyanYog Ashram, C-Block Naraina Vihar, New Delhi by planting saplings in and around the vicinity of the ashram and the neighbouring DDA Park. The plantation drive was carried out with the help and support of the Caretaker DDA Park, MrVinesh. School-going children from the nearby Naraina Village were integrated in this program to increase their awareness of environmental concerns and the role of trees in balancing the eco-sytemin which we live.
Dr B.S. Tomar ,Head of Deptt. of Horticulture, Pusa Institute, New Delhi was the Chief Guest and gave an inspiring talk to the participants, comprising of Executive Committee members of AIKGA, like Mr Sharad Kapurand the Members/ disciples of Adhyatmic Sadhna Sangh.The AIKGA members also gifted plants and potted soil mix to the ashram and explained the need to plant more trees to maintain a healthy environment and avoid hazards of afforestation. A dance and musical program by the children preceded the enthusiastic plantation drive taken up in the DDA Park at C-Block Naraina Vihar.On return to the ashram, prasad was served by ashram disciples in a joyful spirit to the participants. Thereafter, children were gifted with tri-color caps and saplings to take away and plant at their home and tend them. The program closed with singing of patriotic songs and the national anthem, by the school children and the entire gathering.
Some pictures and videos from the ‘Vanmahotsav Program 2019’ held on 14th July 2019 and Flag hoisting on 15th Aug 2019 at DhyanYog Ashram are given below:

Gurupurnima was celebrated by Adhyatmic Sadhna Sangh on 16th July 2019 with devotees of Swami Yogiraj Nanak Chand ji. Disciples and members gathered from near and far to pay their respects and re-dedicate themselves to his philosophy of using dhyan sadhna as the basis for leading a stress-free life. Dr. Ramesh Chandra Misra, ex Professor from Hindi Department of Delhi University and an erudite scholar Nd author of many books on “Sant Saahitya” was the Chief Guest. He spoke about his long association with Swamiji and his key teachings.
The program was held in a spirit of joy replete with bhajan/ satsang, talks, sher/ shairi etc. Pankaj Shrivastava added the right flavour of spirituality with his souful music.
The program concluded with prarthna followed by khula bhandara that continued till late afternoon.

Adhyatmic Sadhna Sangh celebrated International Yoga Day at Dhyan Yog Ashram,  Naraina on  Friday, 21 June 2019 thereby joining the national movement to spread the practice of yoga and dhyan as a way of life.  The sessions were conducted in the holy precincts of the ashram by an expert yoga teacher who has been the disciple of and personally blessed by Swami Yogiraj Nanak Chand ji

The 445th birth anniversary celebrations of Baba Sant Maluk Das were organised by Adhyatmic Sadhna Sangh(Regd.)on Wednesday, 24th April 2019 at Sant Maluk Das Ashram in Kada Dham, Kaushambi with the help of local Pandit Shivkant Pandey. Maluk Das ji was born in 1574 A.D at Maluk Sthal in Kada, Kaushambi District of Uttar Pradesh and lived there for 108 years. It is recorded that his life spanned the reigns of four Mughal Emperors from Akbar to Aurangzeb.

There are a number of miraculous deeds associated with Sant Baba Maluk Das ji, apart from the stories related to his simplicity, kindness, empathy and insight to see that within each one lies a speck of the all-pervading at man. Baba Maluk Das was the inspirational Guru of revered Swami Yogiraj Nanak Chand ji, the Founder President of Adhyatmic Sadhna Sangh who was also the 14th Mahant of Gaddi Baba Sant Maluk Das at Kada. Maluk Das ji is famous for his couplets (dohas), many poetical verses and manuscripts written by him in the prevalent local script of that era.

On the occasion of the 445th Maluk Jayantia number of disciples arrived from Delhi, Gurgaon, Punjab etc. to organise and participate in the program along with the local village folk and followers of Babaji from neighbouring villages of Uttar Pradesh. The highlights of the celebrations were reading of ‘MalukVani’ followed by Aarti, in MalukDas ashram, which had been renovated for the occasion. This was followed by traditional Samadhi Pujan at the Samadhi of Baba Sant Maluk Das, Ram Sanehi and Swami Yogiraj Nanak ji by disciples and local invitees.

On return to Sant Maluk Ashram, Shri Inderjeet Dawar, disciple of Swami Yogiraj Nanak narrated the life of Baba Maluk Das, highlighting the miraculous attainments of Baba ji which even won over Emperor Aurangzeb. A quiz contest was held for local children and the elderlyon facts related to Babaji in which they keenly participated and won prizes. Outstation disciples met the local participants and exchanged greetings and reminiscences. This was followed by the open bhandara program in afternoon for the public at large coming to the ashram for darshan on Maluk Jayanti, 2019. In the evening the disciples and visitors from out-station also went to the newly developed Ganga Ghat near Sheetla Dham temple for a holy dip and prayers. 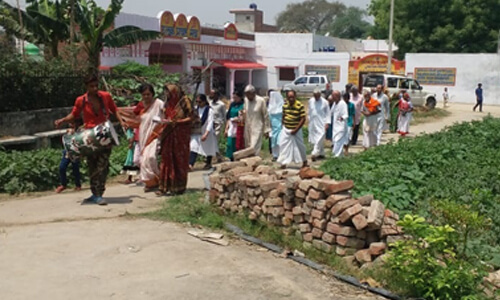 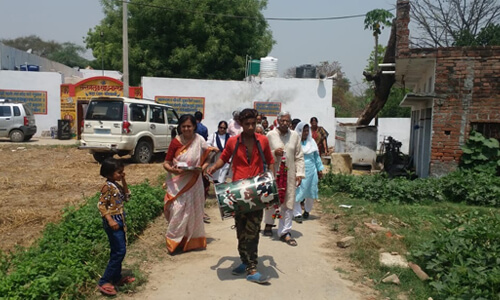 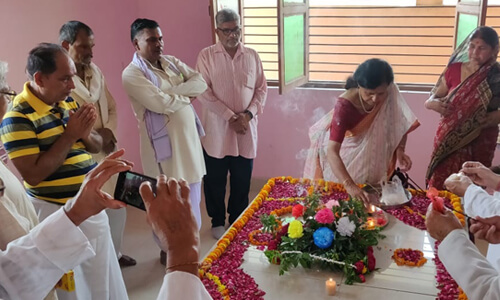 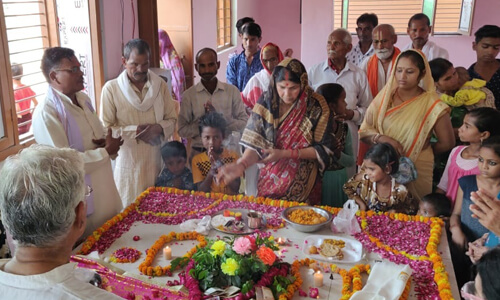 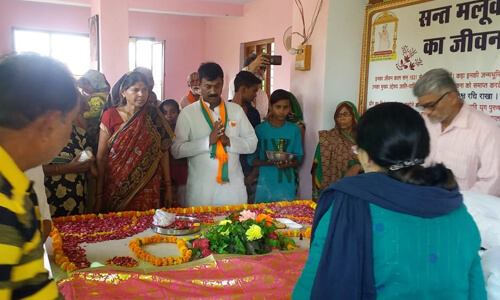 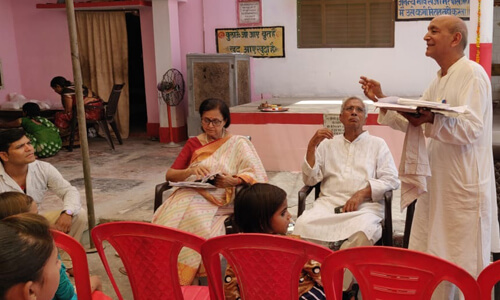 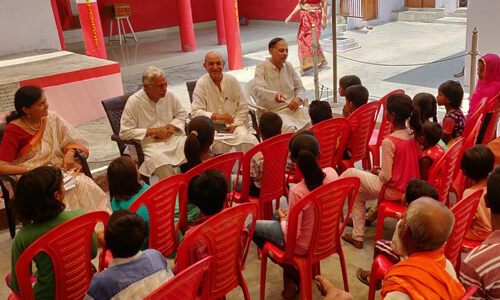 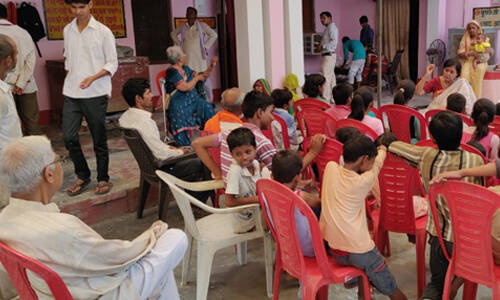 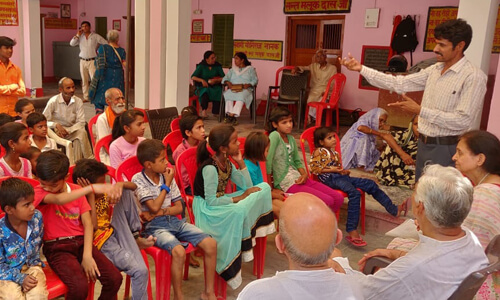 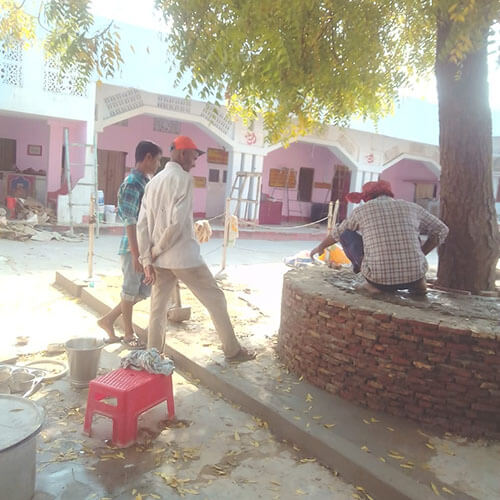 Repair of wall of Annexee 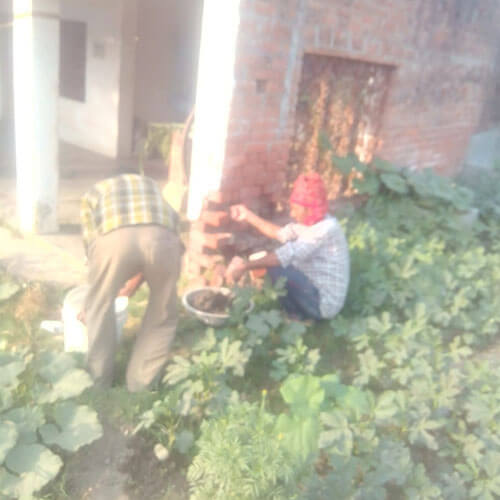 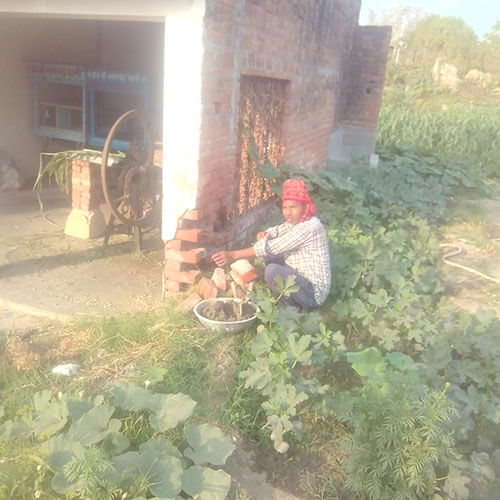 Filling up gaps and potholes under walls 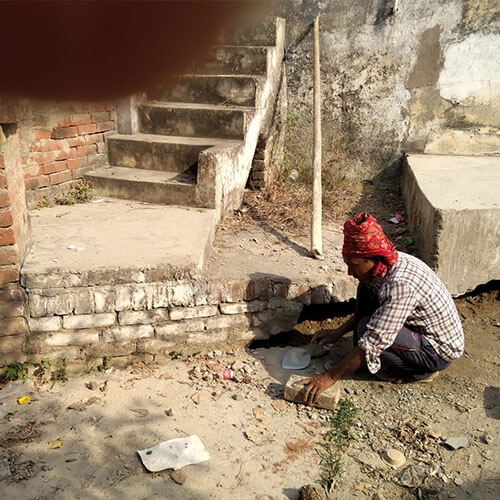 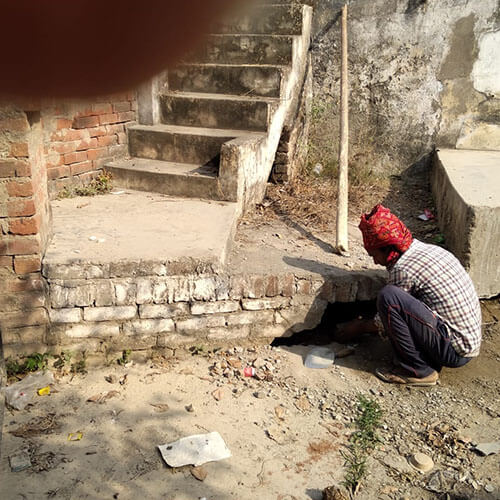 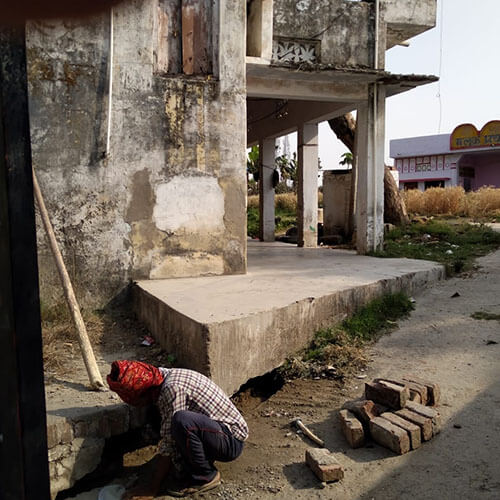 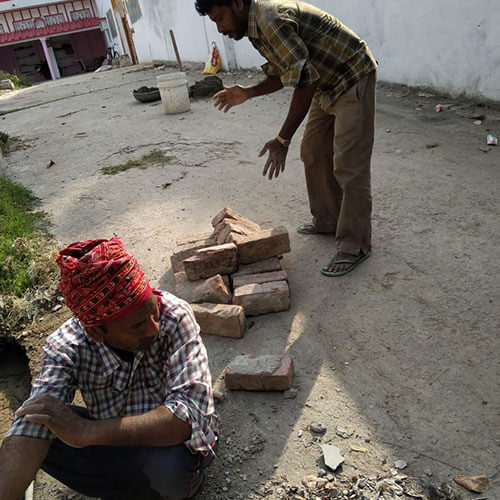 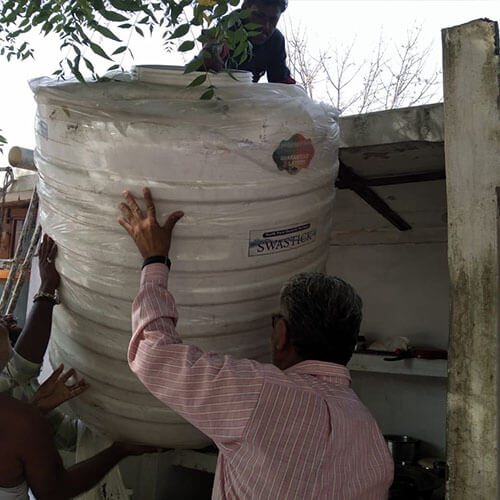 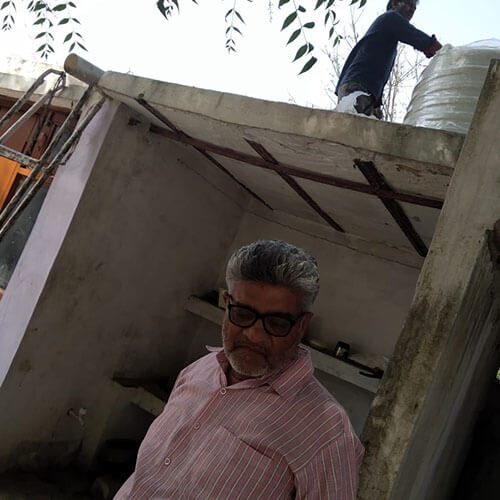 Tiling in porch of Hanuman Mandir 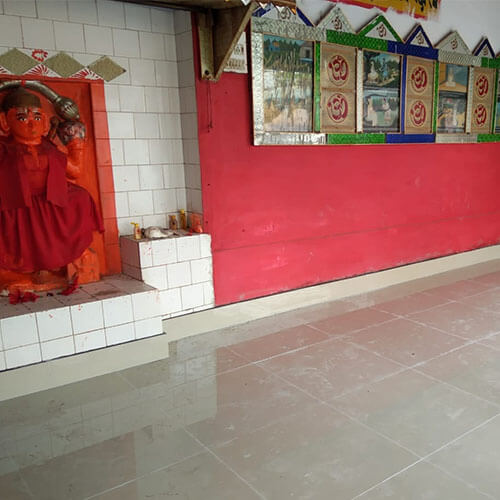 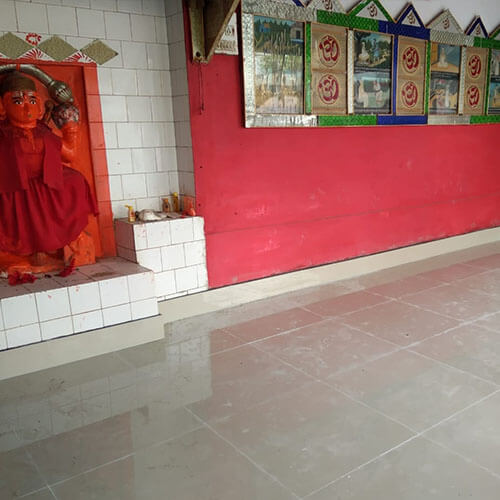 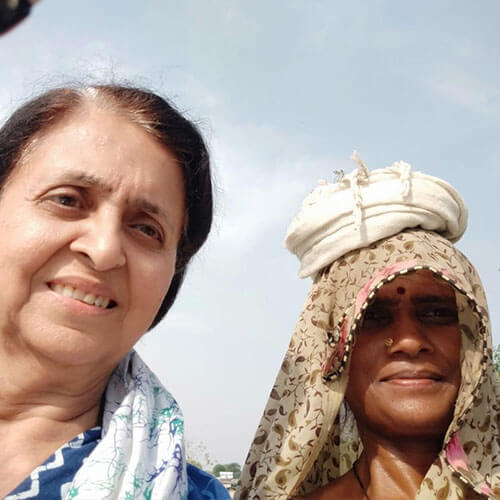 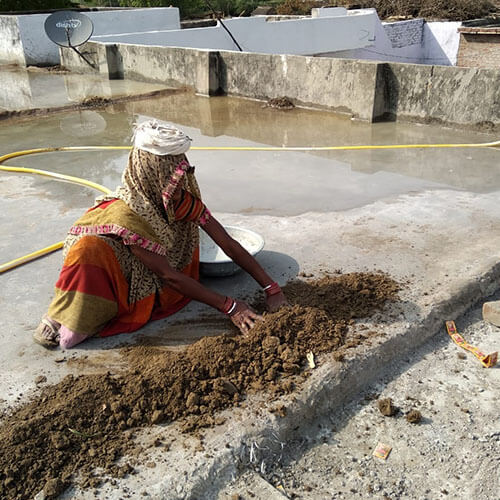 (a)      Cleaning, Repairing, re-enforcement and water-proofing of 4 roofs of old ashram building, which were leaking and needed extensive repairs (approx 1050 sq. ft.)

(b)     Distempering, painting of interior walls of all ashram rooms and exterior walls where essentially required before the 445th Sant Maluk Das Jayanti Celebration on 24 -04-2019

(c)   Repairing of ancient brick-wall near Maluk-Gufa and Annexee and filling up of pot-holes and gaps caused by lashing thunder-storms/ winds during monsoons under exterior walls and base of annexed building.

(d)    Essential sanitary works and allied jobs for improving ventilation of toilets such as fitting of exhaust fan and providing wire-meshes on all windows and ventilators for mosquito prevention.

(e)    Tiling work in the prayer area in front of ancient Hanuman Mandir inside the Ashram.

(f)     Renovation  of front courtyard, brick-work around Neem Tree and raising the washing area on right side for utensil cleaning and creating a passage leading to the toilets.

(h)  Miscellaneous minor works and cleansing jobs to improve the looks of the ashram premises.